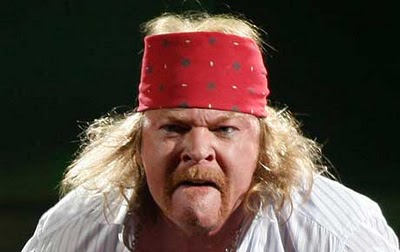 Get this man a chili burger!

“I was waiting for something enlightening and all I got was promotion for a show and his evident affinity for a chili burger,” she says in an interview with Us Weekly following Rose’s appearance on US TV show Jimmy Kimmel Live! on October 25.

Burn! But she was just beginning:

“Where is the love Axl? And I stayed up for this? Sex, drugs and chilli dogs. Long live Axl Rose.”

Get this man a chili burger!

“He’s had a Slash, a Buckethead and a Bumblefoot and evidently way too many Tommy’s chili burgers!”