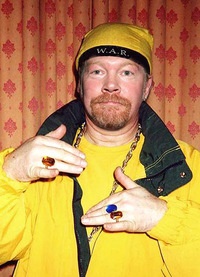 We were a bit worried where Axl Rose had disappeared for the last few months, since the release of Guns ‘n’ Roses’ highly-anticipated and equally disappointing Chinese Democracy, but it’s nice to hear the big man is safe and sound. Not that most of us care where his overly sarcastic ass might be, just that, I guess, people kinda miss his controversial being.

Anyway, I don’t know how, but Billboard just managed to talk him into answering a pretty extensive Q & A, that includes questions about a possible tour, Chinese Democracy (inevitable), Slash, Interscope (the label) and a few more miscellaneous ramblings. Here’s a few question excerpts.

Are you planning to tour?

No plans, but there’s talk. Management and our promoters are really excited with the offers coming in both here and worldwide.

Are you planning to make videos?

We’re finalizing a video for “Better” and writing a couple others now. Over time different ideas have been tossed around, written up or submitted but that was then. Nothing we had come up with — or at least the approaches so far — felt right. We have been discouraged from making a video all along by Interscope, up until Best Buy requested one after the release, and in a manner by Interscope then of, “So where’s the video?,” taking everyone more than off guard.

Is there any chance you’ll work with the former members of Guns N’ Roses in the future?

I could see doing a song or so on the side with Izzy [Stradlin] or having him out [on tour] again. I’m not so comfortable with doing anything having more than one of the alumni. Maybe something with Duff [McKagan], but that’s it, and not something I’d have to really get down into, as I’d get left with sorting it out and then blamed on top of it. So, no, not me.

In regards to Slash, I read a desperate fan’s message about, what if one of us were to die and looking back I had the possibility of a reunion now, blah blah blah. And my thoughts are, “Yeah, and while you’re at the show your baby accidentally kicks a candle and burns your house down, killing himself and the rest of your family.”

Give me a fucking break. What’s clear is that one of the two of us will die before a reunion and however sad, ugly or unfortunate anyone views it, it is how it is. Those decisions were made a long time ago and reiterated year after year by one man.

There are acts that, once committed between individuals, they are what they are. To add insult to injury almost day after day, lapsing into year after year, for more than a decade, is a nightmare. Anyone putting his own personal entertainment above everything else is sickening.

This is the first interview you’ve done in a long time. Why have you been so reluctant to do press now that the album is out?

Lots of reasons I’ve gone into elsewhere, but I can say why I’m doing this one. First, because in all this time it’s one of the first actually formally presented: I was asked to consider it, I liked the questions and I felt it was a good time to address some of these issues publicly. Also, because it’s my understanding that these answers may be “considered” for use with Billboard.com and Reuters [with which Billboard has a syndication deal] and this seemed like a wonderful opportunity to express myself accordingly.

With Reuters, I get their reach. That said, they’ve been particularly ugly toward me and this band for years, with nearly everything they’ve written being condescending or negatively judgmental with the cute little press trick of using negative adjectives across the board whenever they’ve written anything. In our regard they’re one of the media outlets that appear to continually attempt to set a tone for a negative mainstream public perception regarding either us or myself, at least in the United States, if not the world.

I get freedom of the press, but I’m not clear in regard to their writers or those who choose to run their spin, why someone who no one’s ever heard of with so little “real” information is deemed qualified — let alone allowed so much corporate backing — to promote negative and often completely inaccurate and purely opinion-based (at best, if that) shots in forums with so much exposure at the public’s and our expense.

Billboard.com has generally taken a pro-Slash and -old Guns position as well, and I don’t recall having been particularly negative toward them previously either. In my opinion it seems a bit less professional than tabloid in nature. This is an attempt to begin sorting these things out when more than shots across the bow have been taken by both of these organizations — but obviously much more so with Reuters — if not a deliberate public stating of both position and intention, in my opinion.

Boy, this was fun! Read on the whole interview @ Billboard.