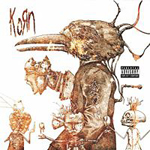 After in their previous album, 2005’s “See You On The Other Side“, [tag]Korn[/tag] recorded without their old time guitarist Brian ‘Head’ Welch (who apparently decided to follow the path of God) another hard blow struck the band. Their drummer David ‘Calvin Klein’ Silveria, who’s tripping rhythm defined the nu-metal paradigm, took a break from music and went in hiatus, leaving the band as a trio. This didn’t discourage Korn in any way, carrying on with their music and recordings, their efforts being materialized in the band’s latest work dubbed “Untitled“. Do not confuse this with the debut self-titled. A self titled release has an identity. An album published under the statement of “why not let our fans just call it whatever they wanna call it” (‘Untitled’ is how the press chose to call it) shows an identity crisis.

The identity crisis is a eternal issue of the music world and of the rock brands, which manifests itself by a cyclicity influenced by technological progress, social paradigms and the permissibility of the concept of freedom of speech. The heavy metal experiments of the ’80s were made in the two divergent directions: on a side the seeking of some form of expression as extreme and difficult to comprehend (trash, death black etc) as possible, on the other side seeking cross-over methods of expressivity, which en globed external elements of rock (gothic, industrial, nu metal).

A similar issue can be observed, at a lower scale and in a more alert rhythm in nu-metal. Firstly, under the metalcore label nu-metal bands are being promoted with more aggressive products then the most extreme products of the ’80s (Slipknot, Devildriver etc.). Secondly, an important number of bands, Korn as well, try to experiment even further in the cross-over spirit, including ingredients which some time ago defined the goth metal label: electronic elements, classical instruments and feminine voices, with a tendency to personalize the message of the album taken to such a level of eccentricity and extreme, that we’re allowed to pick our own album title.

For now Korn have recruited a keyboardist, Zac Baird and a new drummer (for 6 tracks) Terry Bozzio, who used to play for Frank Zappa and another drummer Brooks Wackerman, current Bad Religion stickman.The new product offers a balade called “Kiss”, played on classical instruments. Furthermore, Untitled contains, according to bassist Fieldy, “a couple of songs about almost dying. […] They’re pretty touching, it’s cool”. Yeah touching, that’s a way to put it, anyway in addition to that series of songs there’s a traditional Korn misogynistic track “Bitch We Got A Problem”, but two responses to the calumniations found in former guitarist Brian “Head” Welch’s book “How i found God, quit Korn and live to tell the story” (the symphonic “Ever” and the catching “Love and Luxury”). The LP’s first single “Evolution” confirms with any form of subtlety the groups preoccupations for change and transformation.

The next logical step would be the building of a promotion strategy for the bricking of the new approach credibility. The European experience has succeeded in transforming, in example, a band like Dimmu Borgir from the image of zombies with tophats to a fierce group asociated with holocaust concepts, nihilism and symphonic gravity. In case Korn doesn’t succeed in defining an identity (a image) on the new direction, it will collapse in between the gap left by the two divergent evolutions of nu-metal, they should also be on a look out for Brian Welch’s first baroc nu-metal album.