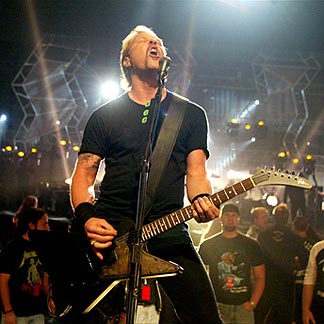 Well as we told you, Metallica leads this year’s group of nominees for the Rock and Roll Hall of Fame, following last years inductees, and people are actually placing bets on who is going to win; as you could probably guess, almost all bets are directed towards the metal gods, despite the fact that they haven’t released anything to their full potential in more than 15 years, and their latest album has stirred mixed opinions.

After Black Sabbath were included in 2006, the road was open for other bands, and when asked who they believe would induct them into the hall of fame, here’s what band members had to say.

[Kirk] “Black Sabbath…”
[James] “Bill Ward said they would play if we get inducted. He said it. He might have to ask the other guys though.”
[Lars] “Dave Mustaine (crowd laughs).”

Hard to believe, but Lars actually made a good joke (I’m just being malitious, you know I love ya).

Also, they were asked why they played songs for Black Sabbath at Rock Hall.

“We weren’t about to sit down and question that when the phone rang that day. We were just like, ‘F–k, yeah! Where and when, and we’ll be there.’ It was obviously, like we hinted at, a dream come true to play those songs in front of those guys. I mean forget about the rest of the room, with all the great people in the room, but just having those four guys there watching us play their timeless music that is pretty much responsible for us being here, that was definitely a dream come true.”