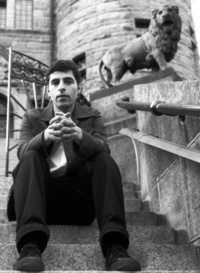 Soul musician José González (yes, he’s Swedish) has just posted a two new tracks off his upcoming second LP “In Our Nature“,  set to be released in 25 September of 2007, on his myspace. I simply loved his debut LP, “Veneer“, his slow, whispery voice and classic guitar just hits my spot and I expect nothing less then a brilliant sequel from Jose.

Right after his second release, Jose will embark on a US record supporting tour. The dates: