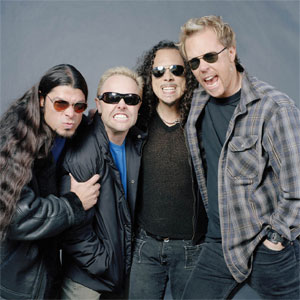 Metallica, trying to be badass

Metallica, trying to be badasss

Last week, we got indulged to a new Metallica song, Cyanide, albeit the live version, during it’s first showing during the band’s Ozzfest performance.

Today, we greet another song off the highly anticipated Death Magnetic, the 8 minute ballad/shredding rocker “The Day That Never Comes.” It starts really slow, in a Unforgiven kinda way, with some tight, harmonic riffs and James, as usual, solid vocals (although a bit not himself here, is it just me?), after which it simply explodes around the 5 minute mark, with Kirk’s ever present shredding, with a One-like bridge. Clearly, the band’s going for Black Album reminiscent stuff, and I’m really cool with that, but the resulted effect isn’t exactly what I’d wish for from the band. Cyanide still seems more interesting.

Anyway, I’m glad they’ve stayed away from too much radio friendly material. You can find the song, as well as the live version of Cyanide (the quality is a lot better than on YouTube) on the band’s myspace. For your commodity, we’ve ripped sampled the MP3 bellow. Remember folks, Death Magnetic is out September 12th.