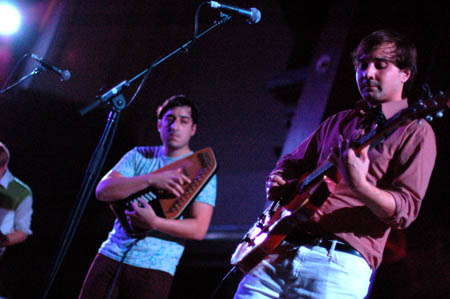 We’ve really been keeping our eyes and ears piled on Grizzly Bear‘s new, still untitled, album progress for a while now, even numbering it amongst our top 10 anticipated of 09. The follow-up to 2006’s gorgeous Yellow House is currently, more or less, ready, since recordings were finished since December, but work is still in progress, as far as mixing is concerned.

Seems like GB is looking for some really good production work, although I’d advise the band not to try too hard with the mixing. Over-produced music is something we’ve all grown weary of lately, but, hey, who can argue with a pack of indie perfectionists?

Speaking of a few perfectionism, I just stumbled across a gem of a song, inevitably singed by Grizzly Bear. The song’s working title is “2HUD” (the name signifies that it’s the second song recorded during Grizzly Bear’s Hudson recordings), but it’s real name is “Cheearleader” (as confirmed by the band’s Ed Droste via twitter), and it’ll most likely be featured on the new, upcoming GB album. The song is basically everything and nothing you could expect from the band. It’s weird actually, since it gives so many deja-vus. It’s typical, but fresh at the same time. Guess Grizzly Bear’s really good at making very good music time after time, sound fresh, but while always retaining its elusive signature sound. Magic.

The MP3 is right bellow. The track’s a live recording, during the band’s performance at the Museum of Fine Arts in Boston in last year’s August, so please excuse the quality.

If you’re as keen as us to find out more about the band’s new album, check out Stereogum’s progress report. Many thanks to GorillaVsBear for the heads up.