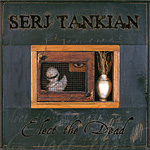 Probably the most recognizable voice in post-modern heavy metal, [tag]Serj Tankian[/tag] has finally broken loose from the SOAD tree and, to his fans delight, released his debut solo album, suggestively titled “Elect The Dead.” As you soon find out, it’s a album about our decaying civilization, the monstrosity of our deeds, the lies that surround us and not ultimately love.

Those of you who are at least vaguely familiar with [tag]System of a Down[/tag], now on hiatus, should know that its band members have all independent musical directions, each a creative force, that’s actually the main reason why they decided to take a break and focus on their solo work. Serj Tankian, together with guitarist Daron Malakian, are considered the masterminds behind SOAD; and a person of Serj’s potential and stature had to expand his horizons.

His latest work, Elect The Dead, although it reminisces old SOAD days, is a whole lot more personal. It reflects Serj’s beliefs and thoughts upon our surroundings, the events that happen unknowingly around us; being a convinced activist, you’ll find Serj album very political infused. A interesting fact is that Elect The Dead has been entirely produced by Serj himself, in his home recording studio, even more interesting is that he did most of the instrumental job as well, including guitar, bass, while the drum parts were all composed and programmed on drum machines before he brought all time SOAD drummer John Dolmayan to play live drums as well.

The record is packed with barrages of heavy metal guitar riffs, intertwined with hammering keys, drums and dynamic noise, but also features melodic tunes as well; like the female vocals backed up song “Baby,” the deceiving ballad “Lie Lie Lie” or the title track “Elect The Dead”.The alternation from serene to madness, that could be found through out SOAD records, is ever present in ETD as well. The best example could be “Money,” starting off with a calming piano line, continuing with soft guitar chops as Serj sings about avarice and betrayal, before erupting in a full heavy metal chorus, with Serj shouting at the top of his lungs “MONEY!”.

The album’s opener “The Unthinking Majority” is the most catchy song off the track list, with excellent metal hooks and extremely heavy chorus. Here Serj’s political lyrics are it’s best, singing about our blinded faith, cultural issues and of course a direct critique to the American administration, more explicitly concerning the Iraqi oil. “Empty Walls” is one of the must upbeat songs, it’s extremely fast paced and rhythmic, with great heavy riffs and what I consider Talkian’s best vocal skills display; lyrically it follows down the same path as Unthinking Majority.

It’s definitely a must have for any System Of A Down fan and provides a very solid foundation for what seems to be a promising solo career. Although many people will criticize him for not being innovating and for sounding to SOAD-like, this is who Serj Tankian is. It’s dark and mysterious, it’s heavy, it’s political, it’s what defines Serj Tankian as a musician and that’s what a solo record should do. Once again Serj Tankian proves he has still many things to say.