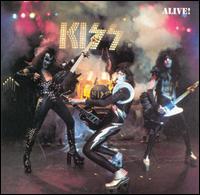 It was this album that catapulted [tag]Kiss[/tag] from cult attraction to mega-superstars. It remained on the charts for 110 weeks and eventually it went quadruple platinum. The producer is Eddie Kramer and he did a masterful job of capturing the band’s live performance on record.

He was able to focus all that energy into making one of the greatest live hard rock recordings of all time. The electric and just wild rhythm sends you into another world; the kiss world.

The most known track is Rock and Roll All Nite and the lyrics say everything that should be said. I wanna rock and roll all night, and party every day; what better way of saying it is there? This is a must have, an essential addition to any rock collection. It is a bomb.