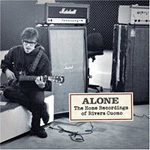 As the frontman for the cult phenomenon band [tag]Weezer[/tag], Rivers Cuomo has always managed to form a pop eccentric image and most of all a dictatorial presence in the band, as it’s widely known he says what goes and what doesn’t in the geek group. He’s a perfectionist in nature, proved by the fact he’s recorded and dumped, in his whole career with Weezer and other side projects, over 800 tracks. It’s mainly because of this why I was extremely surprised of his first solo record, “Alone: The Home Recordings of Rivers Cuomo,” a collection of demos recorded most probably in his basement, containing “eighteen tracks, spanning my demo-making career from 1992 to 2007″ as Rivers put it in a recent interview. The reason why I was so surprised is that almost all of the songs sound so under produced, half-backed, with out of sync vocals and rusty guitar works; overall things that Rivers would usually never allow to see the light of day with Weezer.It has a constant vibe of rawness around it, trough out the listen, that I just love.

When you’re listening to Alone, it feels just like it was conceived on the spot; you know it’s like when you’re coming stoned drunk from a party, or you’ve been really disappointed by a loved one, and you just pick up that guitar and start playing it. That’s how Alone feel like, but at a more deeper level, he is a professional artist after all. This album is not supposed to be “polished”. Just as he stated in the booklet, he let things slide in these recordings that he normally wouldn’t let slide on a Weezer album. Things like botched lyrics, out of tune vocals and instruments. The whole purpose and intimacy of this album would have been lost if he would have re-recorded these in a studio. The emotion, rawness and personalization of each and every song hits you like a never ending roll of waves one after another, and that whole aspect would have been lost if this would have been a studio album. Here you get the originals, the way it’s meant to be.

Besides Rivers’ own collection of unreleased songs, Alone features some interesting recordings covering artists such as Gregg Alexander before he was a New Radical (“The World We Love So Much”), Ice Cube (“The Bomb”), and Dion (“Little Diane”). The World We Love So Much is particularly excellent, besides the iffy sound quality, that Rivers does well to compensate with his unexpected weary vocals. It’s one of the few songs that I’ve heard Cuomo scream, ever. Also unexpected treat, that Alone delivers, is consisted of a few tracks from the shelved mythical masterpiece that is Songs from the Black Hole, a concept album revolving a space mission, which unfortunately never saw the light of day and got eventually morphed into the new iconic Pinkerton. Such song is Alone’s clear gem “Blast off!,” a short lived classic Weezer anthem, filled with laud and rusty guitars, Rivers Cuomo eclectic vocals and here and there synths. The song ends somewhat abruptly though, if you had the tracklist in the wrong order, as it’s meant to be continued by “Who You Callin’ Bitch?,” that sounds a bit like Bohemian Rhapsody on dope.

“Longtime Sunshine” will undoubtedly satisfy the Pinkerton die hard fans, where Rivers gets on his mother’s old piano, with the added bonus of Cuomo throwing his limited clarinet skills into the mix, as he tells the ballad of escaping day to day life. “Buddy Holly,” a old fan favorite from Weezer’s self-titled album, is back on Alone, still sounds pretty great in any incarnation, but doesn’t reveal much in demo form besides some silly keyboard presets. Alone ends with the Make Believe reject “I Was Made For You,” a song about complementarity in love, stands well between Weezer’s best songs and does well to close the demo compilation.

Though it features a seemingly-intimidating 18 tracks, the whole affair clocks in at 46 minutes, largely due to short songs (a wiry and somewhat inexplicable cover of Ice Cube’s “The Bomb”) and interludes (the totally-pointless dialogue snippet “I Wish I Had an Axe Guitar” and the vocals-only experiment “Ooh”). My expectations were very low for Alone, after all, at first glance, it’s just a bunch of home recorded songs that mirrors the frustrations and idiosyncratic thoughts of a eccentric rockstar. Despite all that, Alone has definitely grown on me and has solidified Rivers Cuomo as a talented songwriter and musician.