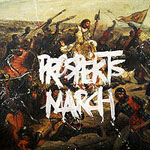 Like it or not, you have to admit that Coldplay made one of the best records this year with their Viva La Vida or Death and all his Friends. That’s understandable why they want to ride on its success and squeeze all the juices till the fruit is fresh.

Prospekt’s March is the EP consisted of b-sides from that tremendous record. B-sides mean leftovers in here. That said don’t expect for it to be something special that Viva was. Say hello to your favorite Coldplay sound that every kid is so good at mocking at. Yes, the guilty pleasure. Minus the pleasure.

Viva opened with instrumental ‘Life in Technicolor’ and that was… shocking? Amazing? Unexpected? Mysterious of any kind? In this EP we’re treated to that fabulous track with unneeded lyrics. It spoiled everything. Thank you, Chris Martin.

What’s next? Less than a minute piano suite? Ok, that is not that bad, but it’s boring and forgetful. Oh, geese, I guess I’ve already ran out of adjectives to describe this record since ‘boring’ and ‘forgetful’ are already taken. Oh well, my bad.

Starting from ‘Glass of Water’ it’s all the same old Coldplay we so love to hate and pinch them every now and then for that melodic whiny kind of a sound (that is ‘oh so theirs!’) But hold on till the “Lost +” pops up to hear one joke of a collaboration that Coldplay lads and Jay Z is. Z man has a talent of fucking up even brilliant songs, now that’s a GIFT!

The thing that is so special about Viva La Vida… is its tender beauty combined with fearless decision to go beyond a formula that used to work. Unfortunately with ‘Prospekt’s March’ Coldplay guys don’t even try…

The good news are: this EP will be quickly forgotten.