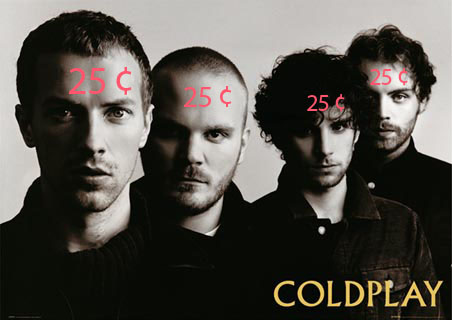 The British ‘rockers’ (really?) seem to have fallen in the dark cold claws of the global recession, with tickets for their latest tour being sold online as low as 1$.

They’ve been touring the US since May this year and they’ve been bringing together quite a crowd, with about 50.000 people per show and they’re bringing the show back in the UK in September.

If you buy tickets from shops, they’ll be somewhere in the 30-90$ price range, but more and more fans are leaning towards online auction, where according to The Sun, prices go as low as 1$. I’m guessing people aren’t actually fighting each other to get to the concert, right?

But really, isn’t anybody interested in Coldplay?? C’monnnn people. I mean, even I would pay 1$ to go to a Coldplay concert.