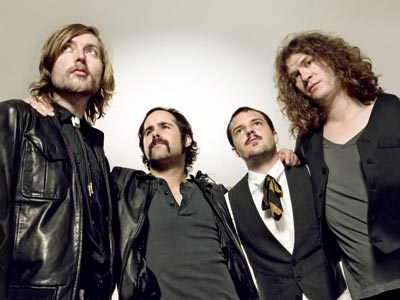 The Killers are working hard and long prepping their third record for the highly anticipated release date of November 25, when “Day & Age” finally gets out. Last year’s rarities/B-sides box set, “Sawdust,” didn’t deliver at all and left me with a bitter taste in my mouth. I mean, it’s not that they’ve released any high-end material, really, but let’s face it they have a few good songs. “Mr. Brightside” or “When You  Were Young” always brings the house down.

Anyway, the first single off the new album, titled “Human,” premiered last night down at BBC’s Radio One, and naturally it leaked all over the interwebs, until it reached the honorable inbox of ZME. Ok, ok, that sounds nice and all, but how’s the song, you say? Damn pathetic, is what I say! Really now, I haven’t seen the band this weak since…ever. Ok, maybe apart from some moments in Sawdust. The synthpop and fake-strings, topped across which lies Brandon Flowers’ shaky vocals. No, I’m sorry, but I just can’t relate to this song. For crying out loud, the song sounds like Pet Shop Boys bastard. Then again, I’ve heard a lot of people enjoying the song, so don’t go around bashing me yet. I’m just writing my opinion on the song. There, you have your disclaimer, now you can legally stone me to death!

MP3 removed due to label complaint. Check out elbo.ws