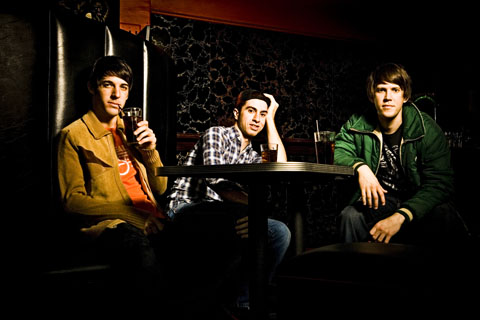 The Whigs are a band that has slowly, but surely, risen among the ranks in the indie/alt rock scene in the last few years. What’s very important to note is that the band’s initial spark of success came based solely on a self-released effort, their 2005 debut “Give ‘Em All A Big Fat Lip“, which eventually was re-released by ATO Records after they signed the group. The sophomore “Mission Control” washed up a few years later, solidifying the band’s position as one of the top up and coming acts, although the break through status was yet to be reached. This could all change once with the band’s upcoming third full length, titled “In The Dark“, slated for a early 2010 release. The record was written this year, between performances on their tour alongside Kings of Leon and Dead Confederate, but it’s still a bit short of completion, recording and mixing being still underway.

It all sounds very promising, especially judging from the record’s title track, released as a free download by the band last week. Nothing too overly complicated, but it’s through the song’s simple garage rock rhythm, balanced with catchy pop hooks, that it shines brightly. [via Indie Music Filter]