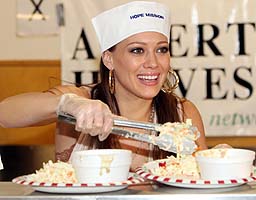 Hilary Duff is used to people waiting to get her autograph, but yesterday morning they got in line for a helping of coleslaw from the popular singer and actress. She was in Edmonton for last night’s concert at Rexall Place and she went to the downtown Hope Mission earlier in the day to volunteer as a server in the lunch line.

Most of the people probably wondered who Duff was and most were glad to see her don a Hope Mission apron and kitchen hat. “There should be more celebrities working here – Paris Hilton, Nicole Ritchie. Just not Britney Spears,” joked Andy Jefferson, 23, who has been staying at the shelter since earlier this week. He added that a stint with a homeless organization would be good for actress Lindsay Lohan, who has been mired in legal troubles in recent weeks. “She should be here – community service,” said Jefferson.

Yesterday’s stop at the Hope Mission was the latest example of Duff’s charity work, which includes a three-year partnership with Alberta Harvest. At her concerts, Duff asks fans to bring in donations for the agency, which collects food for the homeless. “We’ve had such a huge response and gotten to feed so many people, especially in Canada. It’s nice to see that people want to help,” said Duff.

When you are rich and famous it is much easier to help out people. It is nice to notice that some find the right spirit and take the time to give something in return. Hilary Duff has made such gestures numerous times and other young singers have much to learn from that.