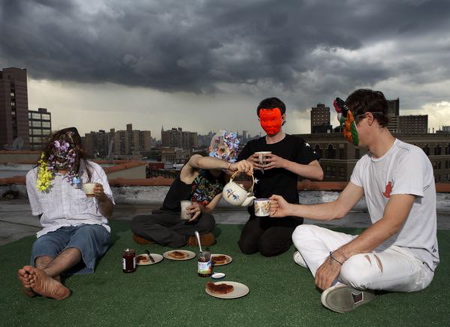 Sometime earlier this morning, the zoological quartet of [tag]Animal Collective[/tag], stopped by BBC Radio 1‘s Rob Da Bank show and were gracious enough to play a few songs live for the show. Not only that, but they played a two new songs as well! Besides the fan favorite “Doggy” from Campire Songs and the psychedelic “Hey Light,” from Here Comes The Indian, the band also premiered two never before heard tracks as well. These are “From A Beach (Bubbly Sun?)” (wondering about the name? well look at the band’s title…) and “On A Highway.”

“From A Beach (Bubbly Sun?)” seems like a “conventional” AC song, with haunting keys and synths, backed by Avey Tare’s and Panda Bear’s whining vocals in their general feel good koala way. “On A Highway” is a bit different, it’s a lot more psychedelic with a repetitive keyboard on the background, while Avey whispers the songs lyrics (could any of you understand anything); near the end the song breaks from its usual rhythm and enlists percussions as well. It’s really a creepy song, but very fun nonetheless. It’s nice to see the guys are still at it, producing new material and while we’re still not out of Jam, we certainly wouldn’t mind a new Animal Collective album. Here are tracks played a the NBC live session, courtesy of Gorilla vs Bear (your the best, kudos!).