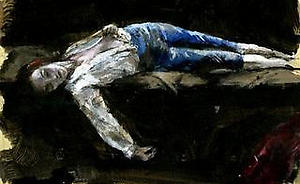 The Pete Doherty fronted band [tag]Babyshambles[/tag] have just reveled the artwork for their latest single “Delivery“, due to be released on September 17. The cover features a painting depicting teenaged genius poet Thomas Chatterton, by famous pre-Raphaelite painter Henry Wallis. Apparently Pete Doherty was always intrigued by the young poet’s work, who died a tragic death, after he committed suicide at age 17, to escape death by starvation. via NME.