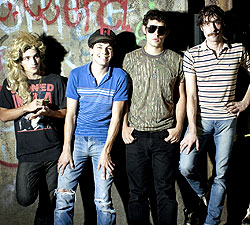 Atlanta [tag]Black Lips[/tag] are almost ready with their new album “Good Bad Not Evil”, with just a few recordings left. The LP is set to go out on September 11 and to better publicize their record, the Black Lips will embark on all North American tour the day after the release.

If you haven’t seen Black Lips live until now, you better ready yourself. On their last performance on Saturday at the Siren Music Festival at Coney Island, NY they brought a … live chicken on stage and sung alongside it.