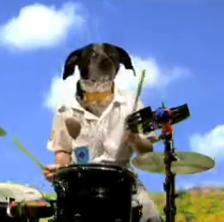 We’ve all seen some weird as fuck videos for some equally fucked up songs by Dan Deacon, but this one… Boy, all I can say is I don’t know what the music video producers for “Woof Woof” were on, but what I do know is I don’t want any of it. It’s a cute video and all, it’s just that most of it all is complete rubrish, with no disrespect meant for the Baltimore collective directors from Showbeast, who did a pretty good job, albeit trippy as heck. A dude dressed up in a zebra costume, running around after a tiger suited demon possessed Dan Deacon, while the whole fucking Sesame Street cast seems to be having a tea party as the whole thing unfolds. Lay off the shrooms, guys! Woof Woof is off Dan Deacon’s last year highly praised album “Bromst.”