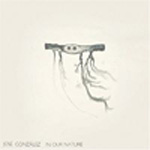 Two years ago, the back then unknown swede goldenboy [tag]Jose Gonzalez[/tag] amazed the entire world with his fabulous acoustic playing and Nick Drake like voice,releasing what was to be one of the finest album of 2005 in the form of Veneer. A Sony Bravia ad, featuring his extraordinary cover of The Knife’s Heartbeats won him his much deserved fame and platinum sales, but also inevitably draw a lot mainstream critiques. Now at his sophomore studio effort, “In Our Nature“, Jose continues down the same path Veneer went, combining soft vocals with plaintive melodies courtesy of the classical guitar.

If on Veneer Jose’s lyrics weren’t quite the best , on “In Our Nature” I can safely say that he’s on top of his game. The main theme is basically the primordial human condition and our place in the world, Jose himself stating that when making In Our Nature he wanted to bring out the primitive aspects in human beings. “How Long” is a nerve racking opener, darky and very critical; lyrics like “punch line after punch line you’re leaving us sore” reveals Gonzalez’s own disillusionment at a world built upon broken promises.

Hate and love, the most conflicting of human emotions are being put face to face in “Killing For Love,” the lyrics are rather week though “..you’ve got a heart filled with passion/ will you let it burn for hate or compassion…); Jose’s guitar finger picking skills are particularly extraordinary. “Down The Line” is one of the album’s highlights, a fast tempo song that talks about various problems we face on the horizon, but which ends abruptly and without resolution. The title track is the most shallow and melancholic song of them all, Jose vocals feel like they reminisce Nick Drave ghost while he tries to explain to himself why there’s so much hatred and misery among us, before concluding that it’s all “in our nature”.

Much as in his previous release, Jose’s most groundbreaking track is a cover, the Massive Attack classic “Teardrop”. Maybe he’s seeking another lightning strike whichever’s the case he succeeded in making a gorgeous song, building up loads of emotions from start to finish, until reaching climax level, overwhelming in its splendor. “Abram” makes a nice and relaxing interlude, while “Time To Send Someone” continues down the same sleepy and care-free slop.

The epic closing tracks “Cycling Trivialities” crowns and summarizes the whole album, questioning the fatality of our action (“How’s it gonna be?”) and broadening the fact that we’re all made of the same dust and ashes. Although sounding more or less repetitive, “In Our Nature” is a step up and a more then worthy follow up to his stunning debut. It’s album that is sure to please hardcore fans and likely to leach new ones as well.