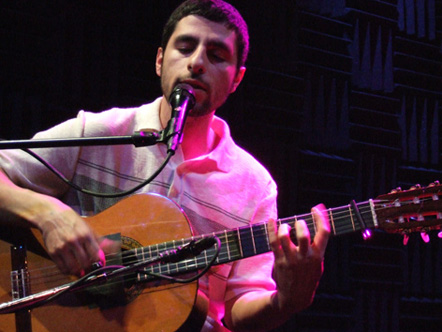 Just a few weeks after finishing his US ‘green’ tour, the Sweedish acoustic maven Jose Gonzalez is ready to hit the road once more, this time for a summer excursion across the whole of North America. The tour kicks of on june 13th with an appearance at the 2008 Bonnaroo Music and Arts festival in Manchester, TN.
Additional festival appearances include the Sled Island Festival, in Calgary on June 28th, the Ottawa Blues Festival on July 3rd and the Austin City Limits Festival on September 27th.

Gonzalez released his sophomore effort, In Our Nature, back in last year’s September and was a total success, topping our best 50 albums of 2007 at #46. Recently he just released “In Our Nature Remixes EP,” featuring remixes from Todd Terje, Penchenga Nord, Beatfanatic, and Landberg & Skogehall, on Earth Day, April 22nd. Tour dates right after the jump.