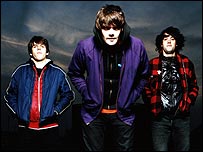 [tag]Klaxons[/tag] frontman Jamie Reynolds broke his foot last night, at a gig in Angoulême, France’s Garden Nef Party festival, after performing a stage dive. He explains on the band’s MySpace that he “drastically misjudged” the 12 feet distance between the stage and the grass and dived with a higher velocity then he expected, leading to a fractured tibia bone and a three-inch plate holding it in place.

Reynolds: “As per usual I jumped from the stage on the final song of the set so as [to] get that little closer, only this time I’d drastically misjudged the … distance between the stage and the grass and landed with a larger than expected velocity on my right foot.

The doctors say that if I spend the next two weeks with the foot elevated then there is a chance of a recovery without further complications but the result is that we’ve had to cancel next week’s Australian tour until some point in the future.

A big apology to all those who’ve bought tickets for the gigs and just to say how gutted we are to be missing out on this trip.”

Due to this unfortunate accident, the band is forced to cancel the Australian dates of their world tour, however they promise the dates will be rescheduled. Klaxons were set to play on four occasion in the “land down under” in Sydney, Byron Bay, Melbourne, Perth from August 2 to August 8. They upcoming Japan dates, August 11-12, seem to still be in place so i guess the Japanese fans can lay at rest. Have a fast and healthy recovery Jamie!

The rest of the Klaxons World Tour dates: