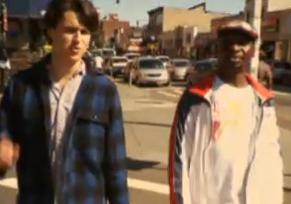 “Warm Heart of Africa“, the debut record of the infectiously catchy The Very Best, hit me totally out of the nowhere last summer when I first spun it, surprising me with it’s fresh blend of African/Western influences. That’s why I was very glad earlier when I first took a glimpse of the newly released video for the album’s title track. The Very Best are notorious by now for their energetic songs and implicit live performances, and the video does a great job in translating the vibe visually, featuring the group’s frontman Esau Mwamwaya and guest vocalist Vampire Weekend’s Ezra Koenig strolling through the streets of New York care-free or through the steps of Africa via the always resourceful green screen. The video premiered earlier on mtvU.