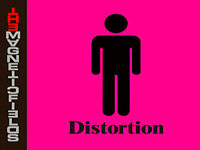 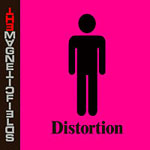 Highly regarded as one of the most inspired and gifted songwriters of our times, Sthephin Merrit, is less an eccentric, as most people tend to call him, but more of a musical maverick, with a disregard for musical ethics, approaching each of his projects like he would a epic initiating journey. Thus, together with his cohort of fine musicians, with whom he forms [tag]The Magnetic Fields[/tag], Merrit has managed to release constant flow of synth pop compilations, like the 1999 conceptual 69 Love Songs, the album that catapulted the band into mainstream success, that really contains 69 love songs, spaced across 3 CDs; or 2003’s i, another conceptual album, that has every song with the personal pronoun in the title. Now four years later, Merrit doesn’t seem to want to abandon the conceptual album model with the groups ninth record, “Distortion.”

You haven’t guessed it, being a conceptual album, Distortion’s main theme and music are centered around … well, distortions. The fuzzy electric guitar effect hangs from everywhere on the album, creating a hazy, echoing, pulsing backdrop for all of Stephin Merritt’s songs, making them all seem rockier and more aggressive than usual. The band’s more retro, ’80s synth pop a la Beach Boys vibe is still here though, this time with a dash of Jesus and Mary Chain‘s 1985 debut Psychocandy, an album that’s often cited by Merrit as a inspiration.

Distortion opens up with a seemingly all instrumental track, “Theree-way,” comprised of progressive distorted guitar work, with a here and there random out burst of the song’s title, the track’s only line. Simple and strait forward, a excellent choice for a opener. It’s always hard not to associate Brian Wilson with The Magnetic Fields, but on “California Girls” the influences are evident. Here Merrit shares vocals duties with Shirley Simms, a longtime collaborator since 69, as both spit out harmonies on a dusty, fuzzy guitar background.

“Mr. Mistletoe” would’ve made the perfect Christmas song. It’s sheer brilliant and makes my various song out of the whole 13 track list, as Merrit plays the melancholic narrator. “Oh, Mr. Mistletoe, wither and die / you useless weed / for no one have I.” “Zombie Boy” sounds like a like Ultravox wrung through cheesecloth, while “Drive On, Driver” finds Shirley Simms singing her heart out, like only she knows how. The records is also filed with here and there moments of humor, like the echoing, insulting intro for “Too Drunk To Dream,” a celebration of alcohol intoxication.

Distortions is definitely a step up for Merrit and The Magnetic Fields, but mind you it’s not classic. The distortion game could’ve been played better, maybe with some more loose fuzz guitars and a little more psychedelic synths. It’s that type of record you curiously and fascinatingly experiment, enjoy it, but never listen to it twice.