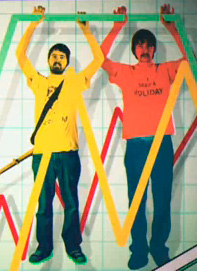 Over the wall band

I just stumbled across this incredibly magical video a few minutes ago over the web and I just can’t stop watching it over and over and over again! Ok, I’ve left you a bit in the mist, and I apologize for it. To be more explicit, I’m talking abut the music video for “Thurso” by Glasgow indie band Over The Wall.

The song itself, although very soothing and melodic, is far from being anything mind numbing, but the video … oh boy, what a trip. If you also take into consideration the fact that it’s been made for an obscure band, you’ll soon appreciate it even more. Anyway, I won’t try to spoil it too much with worthless words – instead, I’ll just let you watch it. Do have your say.