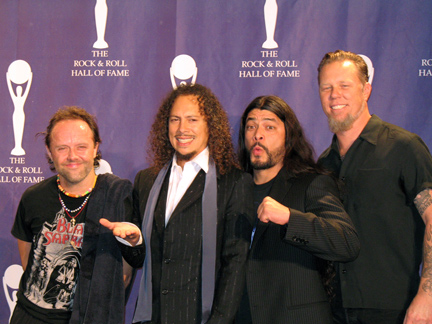 This is turning into a soap opera already. After they first announced it in February they changed their minds and delayed it, claiming they want to make something great. OK, that’s good, as long as it rocks. Makes sense, good things come to those who wait.

But is it that good? Honestly speaking, I have a huge amount of fate in them. As far as I’m concerned, when you think about what kind of music they can do, St. Anger sucked. But I bet they still have what it takes and they won’t let us down this time.

Steve Wiig: “I hear it all of the time. I can’t get away from it. I’m usually in or around the studio with them. There’s some fast stuff, heavy stuff, slow stuff. There’s some stuff on there that sounds a little bit closer to the “Fade to Black” / “Sanitarium” / “One”-style. the clean riff thing, a great melody. Verse stuff with the heavy chorus and the ending blows the shit out of the roof. It’s cool to hear them doing that kind of thing again. That’s what Rick Rubin has been saying; don’t be afraid of doing more of what you do really well. Don’t try to reinvent the wheel. Just make a really good Metallica album.”

“So far — as far as I know — James is doing all of the lyrics, and not necessarily like what was done for “St. Anger”. I’d imagine Rubin would want James to go off into his own world and tap into his own things and get lyrics that come from the heart. I think James’ track record has definitely shown he is capable of coming up with some deep lyrics when he taps into it on his own. I’m anxious to hear what he digs up lyrically.”

OK, if they tried to make us eagerly expect this album and raise our expectations… well they succedeed. In the meantime, let us pray for them.