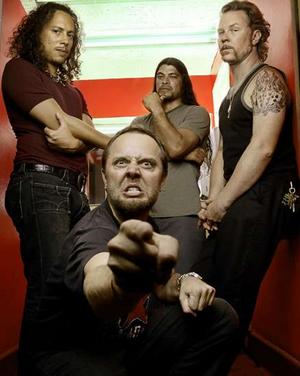 A few days ago we announced in an article that everything seems to announce the new Metallica album for February. Now sources from within the band’s record label announced that album is now expected to hit the stores in September.

Even more than that, the band is still in the studio! Fans can at least think about the fact that the last time Metallica spent so much time on an album was in 1991 and led to the Black Album. We can just hope it will be close to that.

Ulrich gave an insight on what the album is going to sound like but he wasn’t to specific; he claimed that he wouldn’t agree that the yet-to-be-titled disc is a full-blown return to the past, saying, “I hate to be that specific, because six months from now people are gonna go, ‘What the fuck? Lars lied to us!’ But it feels that way to me.”

Was he having a hunh of some sort? Sure seems that way. Anyway, meanwhile the band is going on a tour. Here are some dates to quench the thirst for Metallica:
May 28 Chorzow, PL Slaski Stadium
May 30 Landgraaf, NL Pinkpop Festival
May 31 Getafe, ES Electric Weekend
June 3 Prague, CZ Slavia Stadium
June 5 Lisbon, PT Rock In Rio
June 7 Nurburgring, DE Rock Am Ring
June 8 Nurnburg, DE Rock Im Park