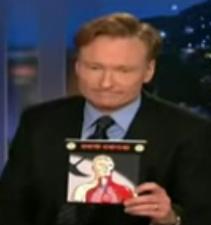 Yesterday aired the first episode of CBS’ The Tonight Show with new found host Conan O’Brien at its helm, picking up after Jay Leno. The whole show was marvelously entertaining, like any premiere should be. Lets not talk TV for now, shall we, let’s talk music! Conan’s first musical guests for last night’s airing were none other than grunge icons Pearl Jam, who played a really solid performance of “Get Some,” a brand new song off their upcoming new album “The Backspacer.” Personally, I love the song – I like its upbeat, energetic vibe it releases, but most probably the main reason I enjoy Get Some is it reminds me of PJ’s glorious debut “Ten.” Other thoughts regarding Get Some?

The new album will be released independetely, with out a label, and distribuited by major retail store Target in the US, alongside the band’s website and various other independent stores.