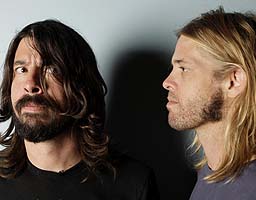 The [tag]Foo Fighters[/tag] were supposed to be relaxing this year after releasing a monster double album (In Your Honor) and touring almost every corner of the planet in 2005. Instead, frontman Dave Grohl and drummer Taylor Hawkins find themselves on a promotional tour supporting the new Foos’ record, Echoes, Silence, Patience & Grace which is in stores.

“We started demo-ing music and we were coming up with some really great ideas and, honestly, at this point the band (is at) this level that we never imagined,” said Grohl and then he added “And just when you think it can’t get any better, it keeps getting better. When you’ve got a good thing going, you don’t want to stop. I can’t even imagine taking a year away from this band, there’s no way.”. They like what they do and they are in it for the music not for the fame and awards.

Grohl said that he wanted to do this album with Gil Norton, the producer of the Foos’ second and arguably best album to date, 1997’s The Colour And The Shape. “After making that record with him we wanted to go the other direction and build a studio in my basement in Virginia, and just do it by ourselves,” Grohl said. “And we did that for three records, I figured it was time to make a change and have someone kind of push us out of that comfort zone. And help us make the band better.”. Hawkins added “It’s our most schizophrenic, eclectic, single record that we’ve ever made”.

The band members are now well into their 30s but they are able to do world tours and make some memorable live performances like at Live Earth in London. Their tour starts Oct. 1 in the U.S. with a scheduled appearance on Saturday Night Live on Oct. 13, before heading over to Europe at the end of October. After that they are going to Canada in December but no dates have been announced.