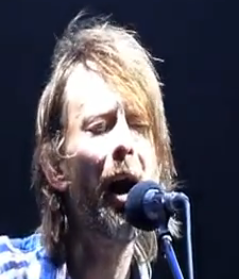 This past weekend Thom Yorke made a surprise appearance on the Big Chill festival stage where he landed an almost brand new Radiohead song titled “Give Up the Ghost” (the track debuted live sometime in February this year, but it hasn’t been played since). The whole performance was dazzling, and as for the song itself – a real gem! Thom went up on stage, thumbed the mic to a beat, then looped one of his harmonies on a pedal and it was only him and his acoustic guitar after that. You can check out the performance in the video embbeded below.

As for Radiohead’s new album, according to the band’s guitarist Ed O’Brien in an interview for MTV, the production work is almost over and  “ideally, it would be great if it came out sometime this year. It has got to. I hope so,” as stated by O’Brien. I doubt Radiohead is going to hit us with their new album In Rainbows style, but I’m willing to be this is still gonna land very spontaneously.