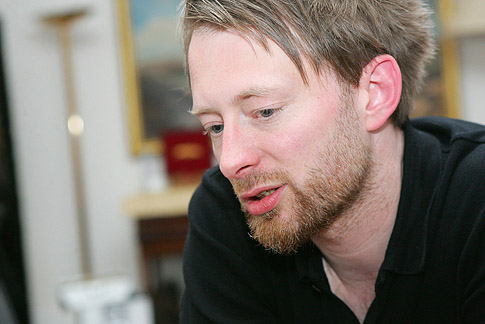 This Saturday, the highly prolific [tag]Radiohead[/tag] frontman, Thom Yorke attended “The Jonathan Ross Show,” on BBC 2 radio, where among other things, he acoustically performed two songs: the mellow “Reckoner,” from In Rainbows and “Everything In Its Right Place,” from Kid A. After the short performance, Thom was interviewed, revealing among other ramblings, that people paid, in average, about £4 UK or 8 US $ for a In Rainbows digital copy. Talks also included discussions about Johnny Greenwood’s soundtrack for There Will Be Blood, of which he refers to as a “heavy mother,” how a life of celebrity treats him and also dwells a bit upon his childhood (uh!).  Listen to Thom’s acoustic set and interview on BBC’s iPlayer, or you can cut the chit-chat and head over to stereogum, where you can download the two live acoustics.