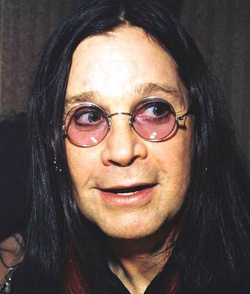 Tomorrow (20th February), the 31st edition of the BRIT Awards will take place at the Earls Court Exhibition Centre in London, where happily married couple Ozzy and Sharon Osbourne are set to present the show. However BRIT bosses have already expressed some concern, regarding the show’s moral integrity, as some of them fear the veteran rocker may appear naked on stage.

According to the Daily Star, the concerns arose after his wife, Sharon Osbourne revealed that the Black Sabbath singer regularly sleepwalks naked in hotels, requiring a bell to be attached to his hotel door to prevent him embarrassing himself.

The newspaper quotes a “source” as saying: “All the organisers are chewing their fingernails because of Ozzy’s appearance. They know how unpredictable he is.

“He has a real devious streak and the minute he realises he will be the centre of attention you just know he’ll want to play up.”

If the thought of Ozzy appearing in nude doesn’t frighten you one bit, then you can safely watch the BRIT Awards. Oh and if this doesn’t send any shivers down your spine, then you my friend, are a devious person. Well at least his daughter (Kelly) doesn’t have any naked sleepwalking habits; that would surely torment me for the rest of my short lived, miserable days.