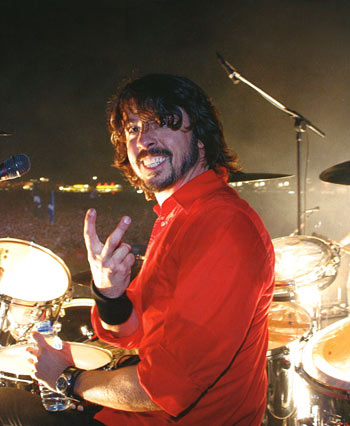 Since The Foos are currently on a undetermined hiatus, Dave Grohl must be getting bored and all that. It’s hard for a musician to entrap creativity inside him, and seeing how Dave’s one of the finest artists in the contemporary rock scene, it’s understandable why we can’t just hang it up for too long.

Apparently, he e-mailed (did the digital age actually caught everybody from behind?) The Prodigy, asking them if they needed any help, as the band’s frontman, Liam Howlett, can relate. “Dave emailed us to see what we were up to and offered his services,” smiles Howlett, when talking to Kerrang.

The song is called “Run With the Wolves,” which will seemingly be the highlight of the upcoming new Prodigy album, titled “Invaders Must Die.” “It was really inspiring. It’s definitely the most venomous track on the album. Wicked,” says Liam when speaking of the track Dave Grohl penned on drums, the two parties working over the Internet.

Does It Offend You Yeah?’s James Rushent also appears on the track “Invaders Must Die”.

When asked about the status of the new Prodigy album, Howlett said:

“All fucking bands say their new record’s their best, but this just feels really triumphant for us,” he said. “It’s on fire. It’s all about the three of us together and what we can do. You know what we deal with: it’s beats in a predominantly electronic style and it’s full of fucked-up guitars!”