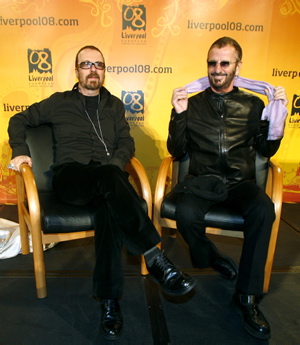 The ex-Beatle [tag]Ringo Starr[/tag] returned home Friday to kick-start Liverpool’s year in the spotlight as a European “Capital of Culture.” It must be a weird feel for him to go back to the city which he started from. After all we all know what Liverpool meant in the history of music;Liverpool gave us The Beatles.

Starr joined the Eurythmics front man Dave Stewart in headlining a huge outdoor concert, featuring around 600 local musicians, aerial performers and children. When I found out about this I was awed. 600 musicians !! Referring to his home city Starr obviously feels nostalgic and it is clearly to notice that from his statements. “They didn’t have the Tate Modern when I was here,” Starr said, referring to the famous British art museum, which has a gallery in the city. “It’s built up over many years and it is all happening now.”

These festivities are taking about a year and the goal of the concert is to shake off its image of economic deprivation, social unrest and gang violence. A laudable effort. But things are not going so good when you think about all the millions that were pumped in an effort to give tourists a better impression.

Graffiti artist Banksy’s nine-metre mural on the side of a pub was among the facades covered up – prompting complaints that the city was targeting neighbourhoods rather than individual blighted buildings and also about 350 other events are scheduled for this year. Could Liverpool be even more desirable than Reading? We shall see.