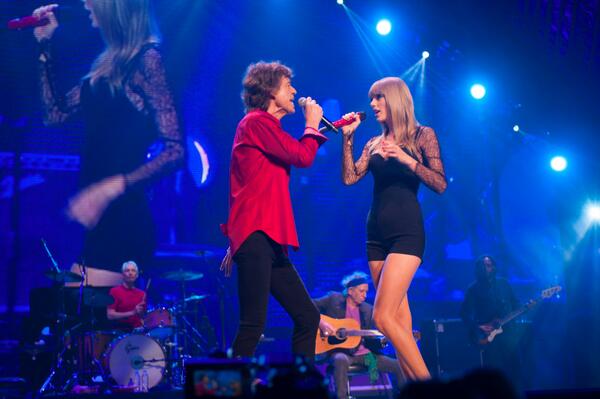 It may not be your cup of tea, but it’s definitely something – The Rolling Stones were joined by Taylor Swift at the band’s gig at the United Center in Chicago last night.

They performed ‘As Tears Go By’, a song which has a really interesting story – it was written by Mick Jagger and Keith Richards for Jagger’s then girlfriend, Marianne Faithfull. She went on to sing the song and actually made a top 10 with it – in 1964. The Stones themselves didn’t perform the song until 2005, almost 40 years later.

The sound isn’t perfect, it’s from a fan video, but the song sounds great, Mick is timeless, and Taylor is absolutely gorgeous, so really, a must see.

Taylor Swift thus joins the very select rank of singers which performed with the Rolling Stones on their ’50 & Counting Tour’, following in the footsteps of Lady Gaga, Dave Grohl, Florence Welch, Katy Perry and Tom Waits.