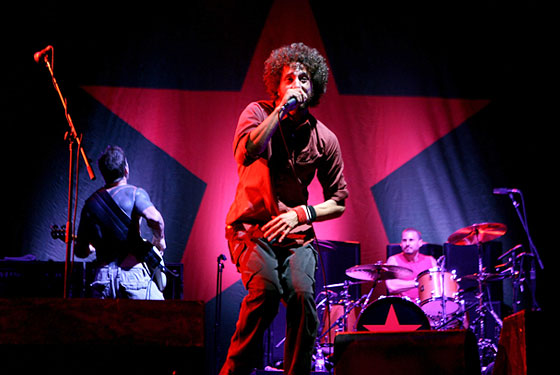 With their last record being released almost a decade ago, Rage Against The Machine have definitely left a generation of fans begging for more. Their music has stewed a lot of controversy, changed lives, possibly over throned regimes (?!), and most of all rocked the hell out of any arena.

Last year, the band reformed under its original lineup and performed some massive gigs cross country, proving they’ve still got it in them. Now, fans one more reason to get thrilled, as a new RATM album might just be inches away from getting planed and ultimately recorded. According to the band, they’re in talks with long time label Sony for a new album, which, assumably, could see the light of day in 2009. “We’re hopeful, but a new album is far from definite.” says a band official. Also, a month ago RATM frontman, Zack de la Rocha, had a chat with the Los Angeles Times in which he further hinted about possible new material.

“We’re going to keep playing shows – we have a couple of big ones happening in front of both conventions. As far as us recording music in the future, I don’t know where we all fit with that. We’ve all embraced each other’s projects and support them, and that’s great.”

The current state of the economy, Bush, the recent outbreaks and conflicts, all make good material from which the band can draw some new stuff.