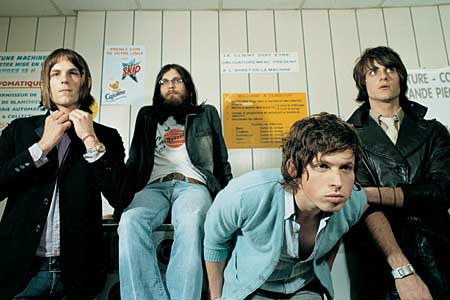 After releasing a stellar album in the form of Because Of The Times, at the beginning of the year, the Followill quartet are already planning a follow up. The band is currently extensively touring the US, after which they’ll head to UK, before flying to the more sunny shores of Australia. In this extremely busy schedule [tag]Kings of Leon[/tag] manage to write new songs as well, and according to the eldest brother, drummer Nathan Followill:

“We’re ready to start the next record, to be honest with you,” says Nathan “We’re touring all the way ’til the middle of January, then hopefully we’ll by in the studio by Valentine’s Day.”

“We do a lot of our writing on the road,” he explains. “Ninety-five percent of our writing is done during soundchecks. We’ll play on an idea for a couple of weeks, and after 10 shows or so we’ve got a song formed out of it”

KoL say they already have 8 new tracks packed and are really exited about a forth album at the beginning of 2008. Until then catch them live at the venues listed on their website.