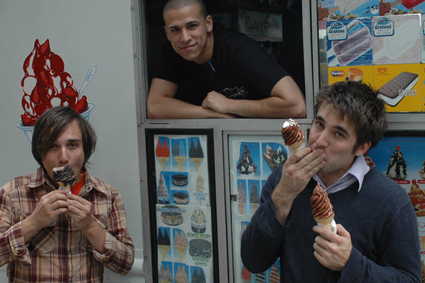 We’ve been hearing a lot from Daniel Rossen this past year, with new music, TV & radio appearances with  his main band Grizzly Bear, and now with his side project Department of Eagles, a folktronica duo, that he founded with his friend Fred Nicolaus. You can blame Grizzly Bear’s erratic performances all over the country and countless other musical collaboration for keeping Daniel away from DoE, but now he and Fred are back on the saddle and ready to release their latest full studio recording “In Ear Park,” some six weeks from now (October 7th via 4AD). Here’s what Dan had to say about the new stuff:

Fred and I had license to try some things that I could never get away with otherwise, but we still went for the lushness and and attention to sonic detail that Chris [Taylor – the producer] and I always want out of a recording.

Anyway, the album’s first single and probably best song is called “No One Does It Like You.” Let me tell you from the start that I just love it, and if at least half the rest of album sounds as good as this, then we might have top 10 on our hands already. The mp3 for the second is bellow.