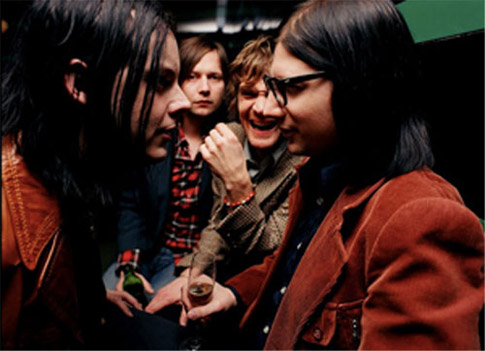 Surprise, surprise. Jack White and The Raconteurs just went all maverick on us and just announced that they’ll release a new album and that no later then next week ! I mean Jack pulled some pretty wacky stunts in the past, the whole Meg White sister-wife thingy being the first to come to mind, but this just might top all of them.

The news came out last night, as the band announced their new record “Consolers of the Lonely,” their eagerly anticipated sophomore album, will come out on March 25 (next Tuesday).

“The reason we are announcing this release one week ahead of time is because of retail pre-ordering and stocking, information about this album’s imminent release was bound to come to light and could be confusing to fans. Also in the event that the record leaks, we didn’t want this method of release to be seen as a REACTION to such a leak. It’s not. The actual worst thing about a leak is the usual poor sound quality, akin to watching a movie on a wristwatch instead of in a theater. Which for the album’s creators is a bit of a letdown, but again, it is completely up to the listener.

A bit out of the sudden if you ask me, considering they’ve lost months of regular pre-release promotional work, but I’m sure Jack and co. know best. Actually because the whole hype that usually follows shocking news, such as this, the band could actually be better off any promotional work. More in last night’s press release:

“The Raconteurs are happy to announce that in one week’s time their second album, entitled Consolers of the Lonely, will be available EVERYWHERE Tuesday, March 25th.

“‘Album’ meaning: full length vinyl, CD and digital formats; and ‘everywhere’ meaning: local mom and pop Indie retailers, corporate superstores, supermarkets, iTunes, Amazon, the band’s own website and any other location that could get the record up and going this quickly (some places couldn’t move this fast, so they will join in as soon as they can).

“It contains 14 new recordings and is being released globally on Third Man Records in conjunction with our marketing/distribution partners, XL Recordings and Warner Brothers Records.

“The album was mastered and completed in the first week of March. It was then taken immediately to a vinyl pressing plant. Then to a CD pressing plant. Then preparations to sell it digitally began. March 25th became the soonest date to have it available in EVERY FORMAT AT ONCE. The band have done no interviews or advertisements for this record before this announcement.

“The purpose: to get the album to the fans as soon as possible and as we promised. We wanted to get this record to fans, the press, radio, etc., all at the EXACT SAME TIME so that no one has an upper hand on anyone else regarding its availability, reception or perception.

“With this release, The Raconteurs are forgoing the usual months of lead time for press and radio set up, as well as forgoing the all important ‘first week sales’. We wanted to explore the idea of releasing an album everywhere at once and THEN marketing and promoting it thereafter. The Raconteurs would rather this release not be defined by its first weeks sales, pre-release promotion, or by someone defining it FOR YOU before you get to hear it.

“Another purpose was to also allow people to have their own choice as to exactly which format they would like to hear the album in IMMEDIATELY, rather than having to wait for their favorite format to become available. The band are also not releasing any version of this record that contains bonus tracks. Musically this album will be the same as the band created it no matter what format it is purchased in. (The sound quality of each format however, is a different story. The Raconteurs recommend hearing it on vinyl, but the choice is of course up to the listener).

“The band also prefer that fans buy the album as a whole instead of breaking up the tracks, but until iTunes and other digital services allows bands to release their albums with the option of NOT breaking it up, it will be sold in that fashion on those particular sites. On the band’s website however, the album will be sold in its entirety as an mp3 at 320kb bit rate. Also in Japan, fans will be able to download the record via their mobile phones, as that is how a majority of recorded music is consumed there.

“The reason we are announcing this release one week ahead of time is because of retail pre-ordering and stocking, information about this album’s imminent release was bound to come to light and could be confusing to fans. Also in the event that the record leaks, we didn’t want this method of release to be seen as a REACTION to such a leak. It’s not. The actual worst thing about a leak is the usual poor sound quality, akin to watching a movie on a wristwatch instead of in a theater. Which for the album’s creators is a bit of a letdown, but again, it is completely up to the listener.

“There will be a video up on the internet for the first single, ‘Salute Your Solution’, on the 25th as well, provided it gets edited in time. We just filmed it the other day!

“We hope not to confuse anyone with too many options, or deny them the formats that they like best. The Raconteurs feel very strongly that music has worth and should be treated as such. Thank you to all those who respect music in this fashion, and thank you to our label partners for working with us to get this album to fans in as many formats as possible all at once.

“Thank you, and we hope that you enjoy Consolers of the Lonely.