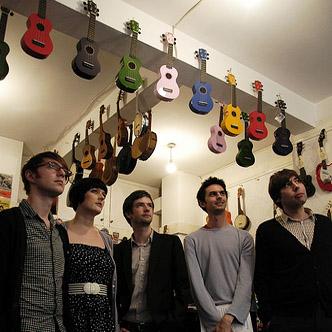 Pocketbooks is lately, probably the most appreciated British indie pop band, if we were to consider the different reviews and critical opinions it has received from various music websites and magazines (you’ll read about it in the interview). They come from London, they have released a 7″, an EP, a single and have recently released their debut album – “Flight Paths”. The album is available HERE for purchase!

If you want to read about great indie pop songwriting and listen to one of the most infectious, melodic tunes then make sure you read about them in the following passages and make sure you throw a visit to their MySpace page or their homepage Pocketbooks, to listen to some tracks and to purchase their tracks. Meet the guys from Pocketbooks: 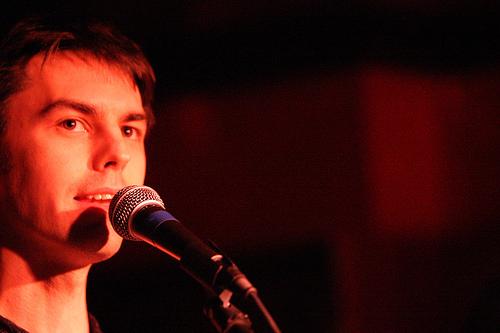 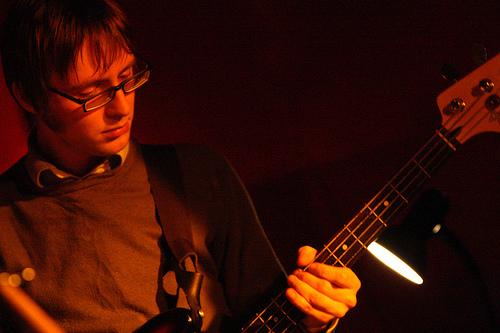 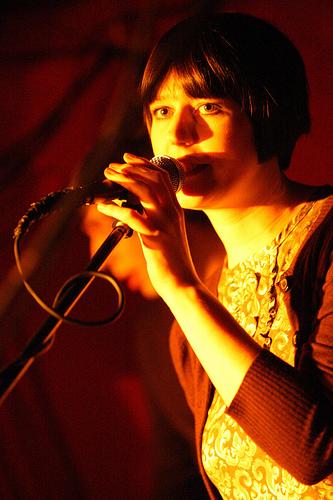 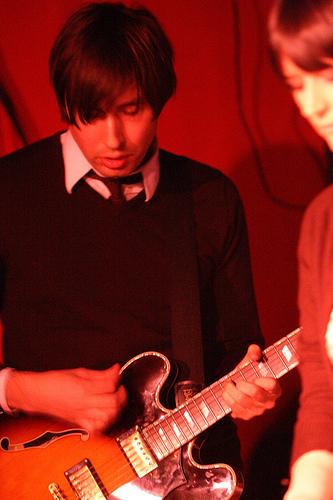 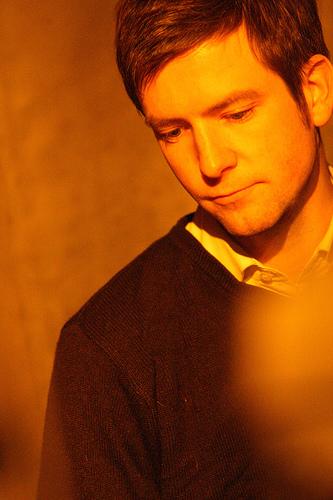 While reading the interview, make sure you listen to “Footsteps”:

ZME: Could you please make a short description, each of you, using no more than 4-5 words each. What best characterizes each of you – your characters, your way of life etc? Also, please mention who has what job in the band, who plays what instrument and who’s vocals are in all of the songs?

ZME: You’ve released a 7” in 2007 – „Cross the Line”, followed by an EP in 2008 – „Waking Up” and then you’ve released a single in 2009 – „Footsteps”- just a month before releasing your very first album – „Flight Paths”, on July 13th. You’ve been obviously quite busy. Tell us a bit about how it has been to work on your debut album. How much time did it take? Where did you record the album? Who wrote all lyrics?

Andy: Well, the songs on the album were written gradually between 2005 and 2008, and we’d been playing most of them at gigs before we recorded them. We recorded them over five days in a Soup Studio, which is located below a ukelele shop near Brick Lane in London. Fortunately we managed to resist the temptation to drown the whole album in ukeleles! Everything was done pretty quickly – we couldn’t really afford to spend days in the studio experimenting and mucking about, so we just went it and recorded the songs as if we were doing them live. Andy wrote most of the lyrics and Emma wrote them for a couple of songs. I think it was mostly fun, although it’s also a bit stressful and scary recording in a studio, knowing it’s going to be committed to tape forever.

ZME: Also, considering you’ve released various tracks by now, which song previously released, would you say, is closest to what you wanted to obtain out of your music? Which one includes everything you always wanted to get from „THE” song? Which is your favourite, the closest to perfection, and why? Is there one song you’ve been working the hardest for? Of course, I know you’ve still got a long way to go and probably, you’ll release even better tracks. But just take into consideration everyhting you’ve worked for, up to this point.

Andy: Ah, it’s a bit weird picking favourites, and I think everyone in the band likes different songs. I think everyone likes playing Fleeting Moments, probably because it’s quite fun to play at gigs – it’s pretty fast and just gives everyone a chance to rock out. Personally, my favourite song is always the one we’ve most recently written. And then when it’s done, I’m on to the next one, which isn’t always helpful.

ZME: Camera Obscura, Felt, Belle and Sebastian, Simon and Garfunkel, The Pastels, The Go! Team, Orange Juice, The Magnetic Fields, The Beach Boys, The Pipettes, The Ronettes, etc. These are great influences and the presence of all these great bands in your music, more or less, is quite obvious. What would you mention was the exact exact influence of Orange Juice and of The Pipettes?

Andy: I’m not really up on rock history, but I think Orange Juice were on of the first bands to make it cool for bands to to be a bit more sensitive and literate and have a sense of humour and play what are essentially pop songs. You didn’t have to be just a straightforward rock or a punk band anymore, they came up with a style that was much more sophisticated and fun. The Pipettes’ first album had some amazing, perfect pop songs. I really love It Hurts To See You Dance So Well, it’s unbeatable.

ZME: In the same order of ideas, where do you see your pop music in comparison with other Swedish pop bands such as Hari and Aino, The Concretes or Liechtenstein or with Danish pop band Northern Portrait? I see a great similarity and you all make great pop music. Could you share your opinion on this matter?

Andy: Well, I think most of us love all those bands. We met Northern Portrait when they came over for the Indietracks festival and they were really nice guys and have some amazing songs. I think there’s a real affinity between the UK indiepop bands and the bands you’ve mentioned, and aside from possibly The Concretes who are dead famous anyway, I think lots of our friends have been involved in putting on gigs for those bands over here.

ZME: My favourite songs are „Summertime”, „Sweetness and Light”, „Cross the Line” and „Waking Up”. All songs are wonderful but these four won’t escape the repeat button in my car, every day. Taking my little „obsession” for these songs into consideration, could you please tell us the gist of each of the stories behind these great songs. How did they come together? Who plays what instrument? Which is your „favourite” out of these four (and by favourite, I mean… with which song out of these 4 are you most pleased with – maybe it came in a smoother way, nothing complicated, it just felt right etc. )?

Andy: Well Summertime is a fairly cynical song about how summer isn’t necessarily the amazing thing it’s cracked up to be. It was produced by a student called Heather who was studying for a qualification on recording / production / engineering etc and needed a band to record something acoustic to complete a module, so we jumped at the chance. I think she passed that section of the qualification, which is good news.Sweetness and Light is about trying to have a smooth break-up to a relationship without it descending into fights and hurtful gossip. Cross The Line is about two people (one living in the past and one living in the future) who are trying to make the best of living in a claustrophbic city without becoming to cycnical. And Waking Up is about actually getting around to doing things, rather than making plans but never getting anything done.

I think we all play pretty much the same intruments on each: Emma and Andy sing and play keyboards and piano, Ian and Dan play guitar and bass respectively, and Jonny hits drums. I like them all, I don’t have favourites!

ZME: Please mention 10 other indie pop/rock bands you like listening to when you’re at home, relaxing, working, doing chores, etc.

Ian: I listen to a lot of music when I’m at work, it helps me concentrate, but not all of it fits the indie pop/rock genre. I’ve been listening to lots of early Bratmobile after hearing the Shrag album which really reminded me of them – so yes, Bratmobile and Shrag and always The Fall. I can’t believe this stuff helps me to concentrate actually. I listen to quite a bit of the mid/ late period Sarah Records stuff too, Blueboy and Brighter especially. I’m always listening to The Cats Miaow and The Lucksmiths no matter what I’m doing and Rose Melberg is my indiepop heroine and I’ll never bore of Tiger Trap, Go Sailor or The Softies.

Ian: I’d go for some soul classics, 80’s cheese and a slow dance to The Ronnettes to end the evening.Come See About Me – The Supremes
Kids In America – Kim Wilde
Egyptian Shumba – The Tammys
The Clapping Song – Shirley Ellis
Wait til My Bobby Gets Home – Darlene Love
Too Shy – Kajagoogoo
Summer of 69 – Bryan Adams
Borderline – Madonna
Nowhere To Run – Martha Reeves and the Vandellas
Be My Baby – The Ronettes

ZME: If you could choose the list for a festival, whom would you love to see performing, next to your name? You can ignore time frames and choose bands that aren’t performing anymore. Let’s say there should be 6-7 names, next to yours.

ZME: I looked at your „upcoming shows” list on your MySpace page and I have only noticed three concerts coming up. Considering that your new album has only been released for two weeks now, can we expect more shows from Pocketbooks? Moreover, when could we expect to see you guys perform live in Romania?

Andy: Yes, I’m sure we’ll be doing more shows, although we’re going to have a little rest after September as we’ve been playing almost non-stop for three years! I’d love to play shows everywhere, including Romania, but unfortunatly we all have proper jobs and it gets expensive travelling around. Hopefully one day!

ZME: “Some of the finest songwriters in indiepop today” (Skatterbrain); “Everything about Pocketbooks is perfect, from the obvious world-weariness to the pretty, pretty music, to Emma Hall’s voice.” (Tasty Fanzine); “Pocketbooks are the best kept secret of the thriving London indiepop scene right now.” (Indie MP3); “Memorable for all the right reasons, their blend of summer feel good melodic riffs and sweeping choruses were certainly infectious…” (Efestivals)… and these are only a few great reviews for your so far released tracks and live performances. You’re a pretty new band, if we consider your very first official release – 2007. After only two years you have received all these great reviews. And you deserve it, most definitely! However, I bet you also have an indie pop band you love the most, you appreciate the most. Please use the adjectives in Bold and describe or give a review to a song or album of your favourite indie pop band right now. There are 5 adjectives so a sentence of 3-4 lines should do. And remember, it has to be an indie pop band that still performs.

Andy: Gah, that task is really hard! I’m afraid I’m going to duck out of answering it, sorry. I used to write reviews for a music website, but gave up because I was terrible at describing music. In terms of just indie pop bands (and with apologies to any of these who doesn’t want to be described as indie pop), I can heartily recommend loads of bands, for example, The School, Butcher Boy, MJ Hibbett, Hong Kong In The 60s, The Rocky Nest, Horowitz, Standard Fare, Northern Portrait and Cats On Fire, who are all of those things and more! I wouldn’t want to associate any them with a badly-written review by me, but they are all beyond fantastic!

If you are still not convinced about Pocketbooks, then you have to take a look at this video: