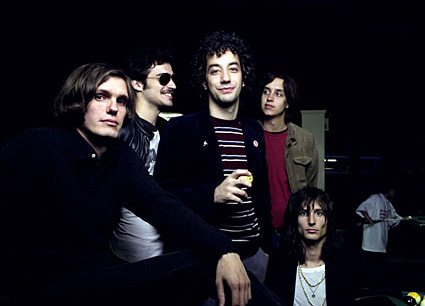 The garage rock revivalists have been on hiatus for quite a while now, but, apparently, the band’s going to get together soon and try some new things out, at least that’s what The Strokes drummer Fabrizio Moretti recently stated. According to Fabrizio, the band will reform and hit the studio to start working on a follow-up to their previous 2006 effort, “First Impressions On Earth“. “We have plans of meeting up all of us together in February to kind of start noodling around and stuff,” says the talented drummer.

I’m pretty psyched to hear this, especially considering that a lot of rumors were revolving around the band saying a break-up was imminent. Actually, Moretti also revealed that the issue wasn’t as far from the truth as must fans thought. “I never had anything to base that anxiety on, but it crossed my mind,” he confesses. “We all kinda knew we were just taking a bit of a break.”

Let’s hope for the best and wish for something as refreshing and soothing like “Is This It” or “Room on Fire.” Not to say First Impressions was weak or something – Jukebox and You Only Live Once are awesome, but most of the other songs are kinda fillers.

Oh, and speaking of Fabrizio, during his break from the band, he teamed up with girlfriend Binki Shapiro and Rodrigo Amarante of Brazil’s Los Hermanos to form a power trio, called Little Joy. The band’s debutis out next month, and features Fabrizio playing guitar, bass and piano. And no, this is not a side project, not according to his definition of the term, at least.

“This would’ve been a side project had it been solely my songs and I was singing and I hired these guys. But it’s really a band that evolved into an honest kind of three-part beast, I guess you can say. And I would like to continue with it, even when I go back to the Strokes.”