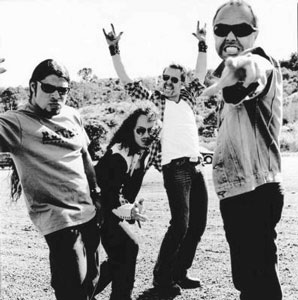 The new Metallica album is getting hotter and hotter, and it’s just making us more and more interested and frantic about it. After the single, the new video, Cyanide, now we have the words of the masters of puppets themselves, talking about their new release.

In the latest issue of Kerrang! magazine, you could read an interview, which is just amazing, at least for me. So tu cut a long story short, here’s what they had to say, as well as some videos with them.

James Hetfield (guitar, vocals): “Despite the earthquake that is going on in the record industry, this band is still relevant. We worked through our problems and now we’ve gone to work capturing our musical essence. We’ve challenged ourselves; we’re hungry.”

Lars Ulrich (drums): “I can honestly say that this album is the best album we could possibly have made. Can I guarantee that people will like it as much as they like our older albums? No, I can’t; I can’t offer any guarantees. But I promise you that we could not have made a better album.”

Kirk Hammett (guitar): “This album is some of the best music we’ve made in the past 15 years. A lot of the albums we made post-‘Black’ album were us trying to get away from a perceived METALLICA sound. That was the right thing for us at the time, but we don’t feel we haveto do that anymore. And to be truthful, it’s fun to play fast, to be heavy. We’re now all on the same page with regards to that. I’d even go so far as to say that we even missed playing that way.”

James Hetfield: “This album has a hunger and a youthfulness about it. We had a new producer, a new bass player… and we worked really hard to get it right. So when you ask me if it is good, if it’s really good, I can honestly say, ‘Yes, it is!'”

Kirk Hammett: “I think we’re all aware of the danger of becoming a band that exists in the past. I think any band that’s been around as long as we have has to face that. But [‘Death Magnetic’] is going to prove to people that we never lost our ability to make an album like this. We just chose not to. And I’ll stand by those words.”