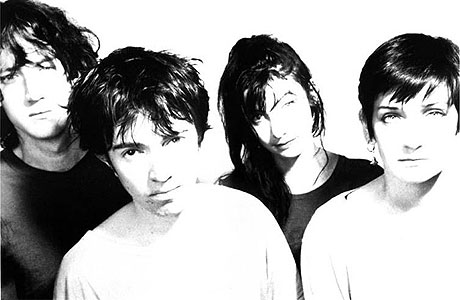 Those masters of the shoe gaze, My Bloody Valentine, plan to inflict another dose of high-octane, high-volume progressive sounds at a secret LA show – said to be a warm-up for their Coachella appearance at the weekend. They will perform at the El Rey Theatre, located on the city’s Miracle Mile, on April 16th.

For anyone who hasn’t heard it already, Kevin Shield’s guitar-laden wall-upon-wall of sound shook the plaster off many music venue ceilings on their 2008 tour of the UK, as the pioneer of modern guitar rock takes pride in turning up the amps way beyond the 11 mark and bursting audience eardrums in the process.

After their gig at London’s Roundhouse in June of last year, the venue was inundated by complaints from once-adoring Valentine fans over the sheer volume beating in their faces – something that they could only describe as like a jumbo jet taking off. Incidentally, they were not far off the mark, as the band peaked at just under 130db, which is only 10db off the sound of the real roar of a jet engine – also known as the ‘threshold of pain’.

Now we all like a good loud in-yer-face rock n’ roll show, but hasn’t Shields taken the safety of the crowd (it must be noted that his band often wear ear plugs or in-ear monitors) a step too far? Perhaps the venues lined up for their tour of the US will be more prepared for the impeding health hazard that is the My Bloody Valentine ear-bleeding extravaganza.

But lets hope they stick to outdoor shows from now on, or at least take the guitars down a tad – we might then be able to hear what Shields has been muttering about for all these years.