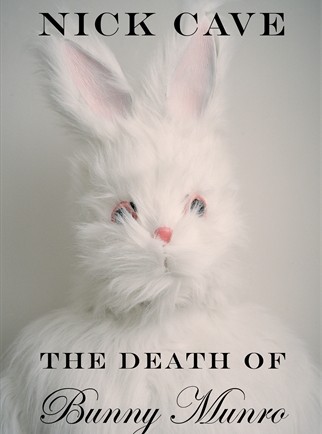 After all of Nick Cave’s  success performing with The Bad Seeds, creating spellbinding soundtracks with Warren Ellis and composing screenplays, the Australian cult icon has now turned to the written word, and is being tipped to deliver yet another artistic triumph.

Cave’s new novel, ‘The Death of Bunny Munro‘, is a menacingly graphic account of a depraved and sex-crazed door-to-door salesman, who also happens to reside in the author’s current home of Brighton, England. Fans of his lyrics’ visual and burning beauty will be pleased to know that this has not been lost on the page. The novel’s protagonist is as provocative as any wild character Cave has pulled out of the farthest corners of his mind, and the book also seems to have a disturbing realism that reminds you just how darkly sardonic life can be. This is something only this author could bring to life.

Any Nick Cave enthusiasts will already know that this is by no means his first toe in the icy waters of fiction, as he had previously released ‘And the Ass Saw the Angel’ in 1990, which won him the Time Out Book of the Year. The gap between the two novels is easily noticeable, but Bunny Munro still retains Cave’s unmistakable haunting perspectives and hypnotic rhythms that were present in his first novel. His latest story is set circa 2003 – early chapters referencing the fire on the Brighton’s West Pier and Kylies Minogue’s hot-pants classic, ‘Spinning Around’.

So far, the Death of Bunny Munro has only been released in Australia, where many of the local critics have been singing their praises for their fellow countryman. It was perhaps put best in national newspaper, The Australian, which described the novel as “not just about sex or playing for misanthropic laughs or revelling in shock value”, but “about fatherhood and love and a quest for male redemption in a desire-racked world.”

But what may be of more interest will be the audio version of the book, which features another sonic collaboration between Cave and the gifted musical virtuoso, Warren Ellis. A click on the audio samples (or even the ‘animated’ video footage) on the official site and you will be lead into the luminescent, sleaze and drug driven hangover of Bunny Munro, with the grating violins and effects of Ellis and the Australian-drawl narrative of Cave setting the tone.

The book is set to be on the shelves by the 3rd of September in the UK, after which Cave will go on a tour of a different kind, signing copies in bookshops across the country. Over the other 31 territories it is being published – including China and Brazil – the release date will vary, as will, I’m sure, public opinion.