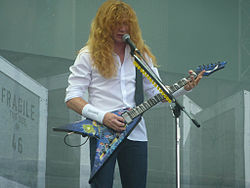 You may love him or hate him (or most likely – both), but Dave Mustaine remains one of the most interesting people in the musical scene.

In a recent interview, Mustaine said he didn’t want all those worn out pyro effects – he wanted something better and bigger, something that wasn’t possible with the available budget. So he bailed the band out.

“Doing something like this has always been a matter of affordability and I finally just said, ‘I don’t care what happens, I’m successful, I’ve had a great run. If we go in a hole and I have to use up my savings to change this band from being a normal band with a backdrop to having really incredible production, I’m going to go for it. It’s one thing to see Megadeth and one thing to hear it, but it’s another thing to feel it.”

Megadeth are currently on their anniversary tour, celebrating 20 years since the release of their album “Countdown To Extinction”. During the interview, Mustaine explained what drove him to create this kind of album in the midst of the full scale grunge revolution.

“The music industry was very confused with the success of Nirvana and all of the grunge bands. The only real hope in metal was what we were calling poseur metal, like Def Leppard.

“Were we going to listen to the labels, who wanted us to write an alternative album, or go the way of the Def Leppards? We didn’t want to do either; that wasn’t who we were. The only choice we had was to follow our hearts and do what we thought was right, which was an experiment for us, a melodic, though not commercial, metal record.”

So, have you been to one of their recent concerts? I’ve gotta admit I haven’t – and now I’m really curious.