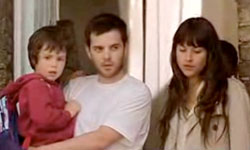 I’ve always been somewhat of a fan of Mike Skinner aka The Streets, especially after his gorgeous sophomore album, “A Grand Don’t Come For Free,” got out a few years ago. His distinctive, sincere lyrics and well put samples (btw, Mike said on his Myspace blog a while back that he’ll soon abandon sampling on stage and will use only live musicians. Props for that, mate!), propelled him to instant success on the British hip-hop scene, as well as earning him some international recognition as a top lyricist and producer. The Streets latest album is called “Everything Is Borrowed,” a welcomed transition off the more dark ground his third album treked into and which, frankly, didn’t fancy me at all. Actually, this is more of a return to the roots, if you will, with a lot of common elements found in his debut LP, “Original Pirate Material.” The first single off the new album is a song that shares the record’s name, “Everything is Borrowed,”  a song that tries to exploin throw analogies how everything in life is borrowed. The video is quite dramatic, featuring a famility on the break of desperation, after men reposes their home. Not very groundbreaking, but still pretty interesting stuff. “Everything Is Borrowed” is out September 29th.