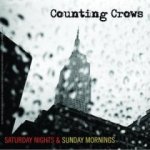 Well boys ‘n’ girls it’s here! Don’t know if you were expecting it, but I certainly eagerly awaited their return. Without further ado, I’ll just get right into it and tell you about it. First of all, the name struck me; could it be related in any way with the novel with an almost similar title, written by Alan Sillitoe. Probably not, doesn’t matter anyway, it’s just interesting if you ask me. It’s fresh, original, and shows that they still have ideas. The good thing is that it resembles the Foos album In Your Honor; the bad thing is that well… it resembles In Your Honor.

Here’s Adam’s claim on it:

“Saturday Nights & Sunday Mornings is the story of what happens when all the bright lights start to burn instead of glitter and you become more of a part of the shadow they cast behind you than the person you are in front. Produced in two parts by Gil Norton & Brian Deck, it’s about a flood of sin and liquor and dissolution and insanity and it’s about trying to rebuild the life you wrecked in the wake of that flood. It’s about the way it feels. It’s about me. It’s a Counting Crows album. We’re back. We were only ever as far gone as you can go.”

The thing is that it’s really easy to agree and to relate to him; the big life is tough. Keeping your head high and holding your breath amidst all these delusions is really tough;and it must be really really hard to strip down to your very core and expose yourself and make music and lyrics in this way.

The album is divided into two parts. The first part (the Saturday nights) is just surprisingly fast, heavy and scrappy… it’s great! A terrific reminder of their early days that will please old fans as well as gather newer fans; and it also lives up to its name, being just like a Saturday night: fast, wild and wicked… just delicious. 1492 is about losing yourself in a party: sex with italian models, drinking, that kind of stuff. This first track is just a shock, but really gets you into the feel of the rest of the album. Hanging Tree is just a guitar force tour; might just be the best song of the album; it’s about not being able to connect with anyone and really feeling alone. Los Angeles gets a bit indulgent on the quality, but that’s the point of it; the tune practically says that they’re trying to have fun. Sundays is laid back, easy and really neat piece. Nice lyrics, in the Katie Melua kind of way. Insignificant is once again a search for meaning and expresses a lack of faith. It’s the singer screaming “I want to get noticed, I want to mean something”!. A lyrical masterpiece. Then Cowboys takes things to a whole new level, and talks about the ability to feel; the protagonist can’t feel anything so he becomes a serial killer. Twisted, scary, wonderful, weird, lovely, devastating, crumbling; it’s all those things! It builds up to a climax, a fantastic ending for the first part of the album.

Then you have the second part, the Sunday mornings. From the first tune you can feel the difference; Washington Square has a strange feeling of quiet, really peaceful and relaxing. Then On Almost Any Sunday Morning has a great twist in the lyrics: the protagonist takes a woman home even although he knows it’s wrong, just because he doesn’t want to be alone. But then he wakes up in the morning and he realizes that he is alone. My favorite song from the album, it really makes you think about things. Really, really brilliant and wonderful stuff. When I Dream of Michaelangelo keeps up the great quality level – touching ballad about reaching for somebody you are really close to, but not being able to touch. Anyone But You is another relationship song – kinda makes you know what Adam is feeling these days. You Can’t Count On Me doesn’t stand out, but it delivers. Le Ballet D’Or is just philosophical; the protagonist realizes the hard things in life and the fact that he has to get through them no matter what. On A Tuesday In Amsterdam Long Ago is really reminiscent of Raining in Baltimore which will definetly deliver for old fans, but newer fans may not be hooked. Still, it’s another fantastic tune. Come Around is probably the odd man out, being really hopeful and optimistic, ending the album in a really fantastic way, with the lyrics:
“And one of the million lies she said
Is ‘All of the things you loved are dead.’,
But I’ve seen what she thinks is love
So we’ll still come around.”
So mates, the Crows are back, strong as ever, so get the tour going already cause we’re waiting for you! If you haven’t listened to this yet, do yourself a favor and go buy it.

Sunday Mornings (produced by Brian Deck except where indicated)