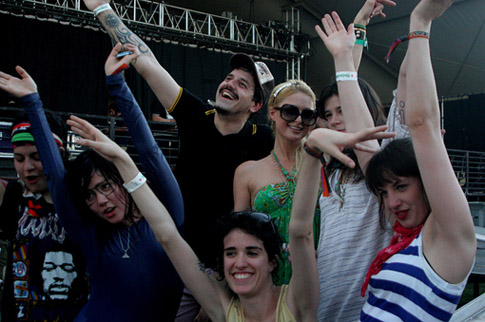 I was really heartbroken when I came to sense I couldn’t possibly make it to this year’s Coachella Festival. I’ve always been a fan of this wonderful weekend musical extravaganza, even though a lot of people have been a bit disappointed with this edition’s lineup. Dudes, Coachella is still Coachella, no matter what bands play it. Anyway, one of the bands that played there, this last weekend of 25-27 April, was none other then Cansey der Ser Sexy, possibly the most vibrant and feel good electropop quintet you could ask for. As always the band pulled out an awesome performance (so, I’ve read *sigh*), unleashing 45 minute worth of pure sexy indie music to the unsuspecting masses. During all the mayhem the Brazilians sneaked by a new song as well, titled “Rat Is Dead (Rage),” off of their new and upcoming album “Donkey“. The song is uber fun, with a catchy bass line and groovy hooks, oh and Lovefoxxx does some cool rave-like vocals. Donkey gets out on June 22 via Sub Pop Records.