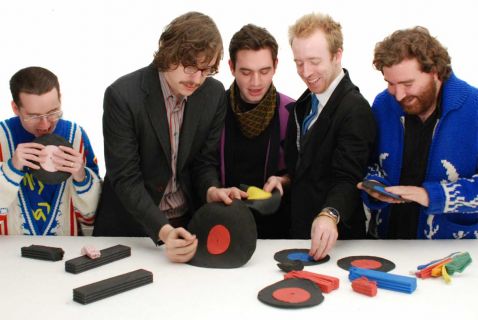 Ah, finally! I’ve been nervously waiting for a follow-up to Made In The Dark, which is quite the pop gem, for ages now, and I can only rejoice at the news that Hot Chip‘s new album, titled “One Life Stand“, will get released at the beginning of 2010. Here’s what I’ve read about the record in a press release I’ve just received:

One Life Stand sees a proliferation of influences as diverse as the burgeoning UK funky scene to soul music, modern R&B, Northern Soul, Gospel, Golden Age Electronica, House, the sounds of Arthur Russell, Prince and Theo Parish- and they all sit effortlessly alongside the band’s signature pop aesthetics, wild electronics, off kilter beats and intoxicating musical experimentation in a way that only Hot Chip can execute.

Sounds like your typical Hot Chip album alright. Look for a couple of guests as well, as they brought in Charles Hawyard from the 70’s group, This Heat, and Leo Taylor from London indie band the Invisible. Still now word regarding the first single or tracklist for that matter, but the band was still kind enough to unveil “Take It In” for the public. One Life Stands will officially surface on February 9 on Astralwerks and February 8 in the UK on Parlophone.[via Indiescreet]