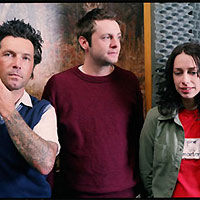 California native Earlimart have gone through a lot of changes in their musical style along their 10 years of existence. Their first records were more post-punk/folk influenced, sounding more like Pixies and Sonic Youth, but ever since Aaron Espinoza discovered that adding a piano can drastically improve their music, they’ve been spitting out sophisticated pop, that often resembling Elliott Smith.

“Happy Alone” is a slow and melancholic track, off Earlimart’s latest album Mentor Tormentor. Espionoza’s piano line dominates the song, accompanied by a remote guitar riffs, but Adriana’s vocals instantly hook you, it’s a incredible catchy song. It’s a song about loneliness and regret, a song for breakups and farewells.